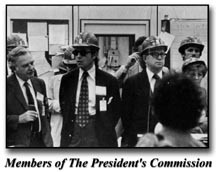 The commercial nuclear power industry in the United States is owned and operated, generally speaking, by various electric utility companies and their holding companies. Rights to operate nuclear power facilities are granted by the U. S. Nuclear Regulatory Commission, an independent agency established by the Energy Reorganization Act of 1974, to regulate civilian use of nuclear materials. The Act of 1974 divided the roles of its predecessor organization, the Atomic Energy Commission, which had been empowered to develop both civilian and military uses of nuclear materials. Following the Act of 1974, responsibility for the development and production of nuclear weapons was given to the Department of Energy. The NRC’s regulatory program is comprised of five components: regulation and guidance, oversight, licensing and certification, operational experience, and support for decisions. The NRC is also entrusted with regulating the use of certain nuclear materials and their byproducts, such as those used in and produced by nuclear power reactors.

The Atomic Safety and Licensing Board (ASLB) is the adjudicatory arm of the NRC. It is the body that hears legal matters related to the licensing and operation of nuclear power plants. This includes litigation brought by the NRC and other parties against licensees for various operational and safety concerns. Matters decided upon before the ASLB can then be appealed to the U.S. Court of Appeals and the U.S. Supreme Court.