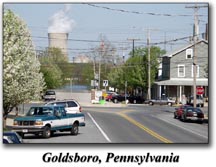 Central Pennsylvania, and especially the area around Three Mile Island, is a largely rural, agricultural region dotted with many small towns. It has only three medium-sized urban areas: the state capital, Harrisburg (just 10 miles north of the plant), York (the first capitol of the United States) and Lancaster (with a substantial Amish population) to the south. Many of the small towns have important historic architecture, showcasing their late eighteenth and nineteenth century histories. Carlisle (21 miles from the plant), where Dickinson College is located, is a perfect example of a late nineteenth century city that never grew to modern urban proportions. Largely Germanic and Scottish in origin, many of the residents are from old and well-established families, many of whom have been in the area for a century or more. They are deeply conservative, both culturally and politically. At the time of the accident, residents were largely pro-nuclear, in the sense that they saw the technology as a modern, cheaper source of energy and felt they had no reason to doubt its safety. They fully trusted both the industry itself and the government oversight agencies that regulated nuclear plants. They assumed that both institutions would have the residents’ best interests upper-most in their decision making and that each would, of course, be subject to the democratic decisions of the citizens of Pennsylvania and the population surrounding the plant. Many were to become deeply disillusioned by both the process involved in the restarting of the undamaged Unit 1 of the plant and by the Nuclear Regulatory Commission’s decision to allow restart in spite of their expressed opposition.